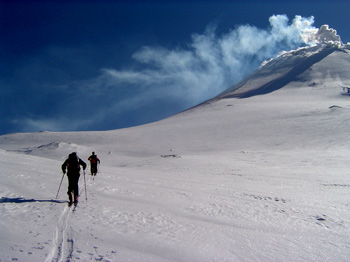 Kamchatka’s volcanoes have never been bloodthirsty. The natives of Kamchatka can hardly recall eruptions that carried death there. A dark silhouette of volcano against the clean dawning skies does not imply a threat – it is usually a token of nice weather for the people of Kamchatka. It is still hard, however, living in such proximity to the volcanoes, to get used to the idea that they are just some geological objects. The silence alongside the volcanoes is of a special sort, the one that fills the soul with an incomprehensible combination of anxiety and peace. Everything looks strange and unusual; you are gazing around as if perceiving a scrutinizing glance of another universe: you feel scared and at the same time happy, for this scrutinizing glance makes you feel someone’s unbound power spreading over you – perhaps that sole true power you want to surrender to.

Which of Kamchatka’s volcanoes is the most beautiful? There is not an unargued leader, but one can certainly name the first three – though, as it goes, there are few objective criteria to assess beauty – nevertherless, the three volcanoes are Kluchevskoy, Koryaksky and Kronotsky. All the three can be good candidates to symbolize volcanic Kamchatka due to their total assets. The feature of Kluchevskoy, its height, (the absolute heights of the volcanoes are 4,750m, 3,456m and 3,528m respectively), is not as significant as it looks as the first glance. The greatest Eurasian volcano has made nearly 5 kilometers of height due to the fact that it was formed on a specific geological “pedestal”, a slope of ancient volcano while the actual height (a relative one) is 3,000 m, i.e. less than the height of Koryaksky (3,300 m) or Kronotsky (3,100 m).

Considering the shape of a volcano’s cone or “marquee” as it was figuratively called in Krasheninnikov’s times, a lot of people with no doubts would prefer the one of the Kronotsky volcano. The geometrically regular, ribbed cone crowned with an icy hat looks in the waters of the biggest Kamchatka’s lake. In its beauty and majesty the Koryaksky volcano does not yield to its two “brothers”. It forms a magnificent ensemble together with the Avachinsky volcano, an integral part of the panorama of Petropavlovsk-Kamchatsky. So, a lot of natives of the city have almost relative feelings towards it. On the other hand, each of Kamchatka’s volcanoes has the beauty of its own. There are over 300 of them on the peninsula, among which 29 are still active.